Elon Musk is a very successful businessman. In particular, there are lecture-like methods that I think will be the subject of books in the future. Especially on the subjects of establishing and growing a Startup and Marketing.

Of course, I am not claiming that Musk is always acting ethically and telling the truth. But he knows very well that the job of establishing a Startup, which is to “create a perception and turn this perception into money over time”.

The Neuralink presentation he gave the other day was also such a marketing effort.

He started the presentation with the following sentence:

“What are we trying to solve as Neuralink?”

However, he never mentioned how.  The device he spoke about during his speech, could be a solution to a brain or spinal cord problem.

Essentially, the Neuralink presentation, which everyone was eagerly awaiting, was based on showing two results obtained by testing a brain implant on pigs.

1. Detecting the movement in the muscles of a walking pig before it occurs

In the presentation, they showed that a pig walking on a treadmill accurately predicted the movement in the leg muscles before it occurred.

However, it was not mentioned what kind of contribution this could make for a person with spinal cord problems to walk.

Currently, there are some initiatives in this area in the world. However, there is no product offered to the end user yet.

While technological advances are promising, Exoskeleton devices are not yet capable of carrying a human, and we know that Pneumatic devices are still not sufficient for artificial muscle building.

In this case, the following was expected from Elon Musk’s presentation:

Explanation of how the severed neural connections between the human body and the brain can be reused by means of a repeater.

However, in this case, it is necessary to remember how complex the neural conduction work is. We are talking about the transmission of data from the brain without being interpreted …

Therefore, Elon Musk’s claim is not realistic. It can be said that even saying that we will produce nerves with a 3D printer is more applicable and realistic.

2.Anticipating the pig’s desire to eat the food in front of him

Animals smell something they want to eat before they eat it.

Based on this, they showed in the presentation that they determined that the implant placed in the pig’s brain would make the movement of touching the food with its nose before sniffing the food in front of it.

However, this is nothing new. Moreover, it is possible to get the same results with head-mounted devices, without the need for such large brain surgeries.

Move various devices with the sensors you attach close to your brain, using a computer cursor, etc. something that has been done for quite some time.

If you look back a little, you will see that many non-commercialized products could be found even in 2005. So, companies that are Neuralink’s competitors have already been working on these issues for years.

In addition, there is no need for an implant to communicate with BCI. These data can be read with the sensors on your head.

On Openbci, you can access researches on this subject and a lot of materials that you can improve yourself with open source code. There are devices that can read your brain activity for every budget, ranging from $ 200 – $2.000 .

We did this kind of work, too

The picture below was taken at a workshop we did at the company in 2019. My colleague wrote commands just by looking at the screen and was able to stop the server services.

He also played a simple song using his own brain waves.

It took him 5-6 hours to learn how to run commands with BCI (brain computer interface). The movement of the cursor with the sensors in his head really gave you the feeling of being in a sci-fi movie. 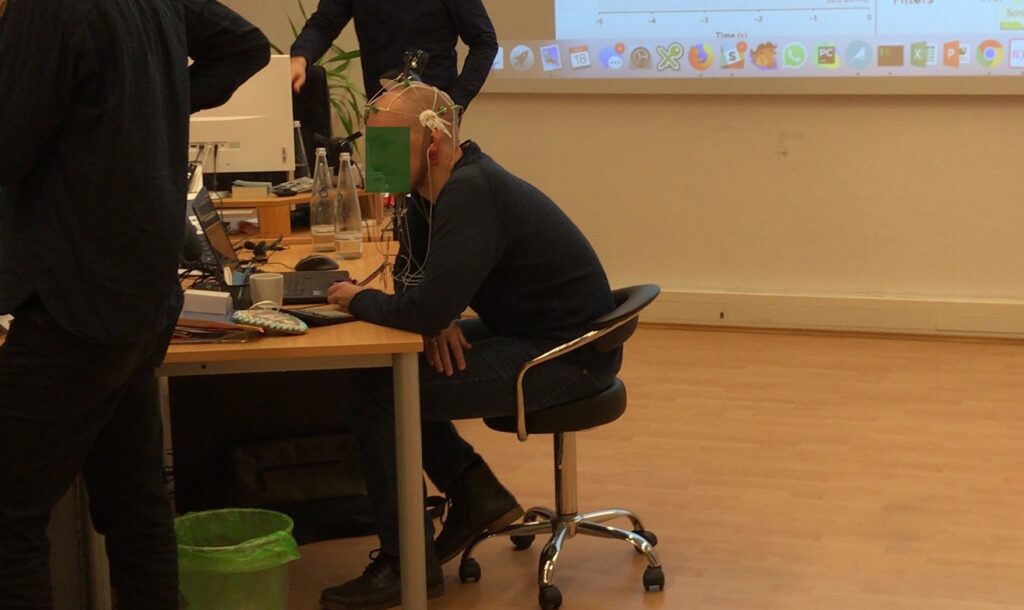 Neuralink’s presentation was no more than a pointless show that said nothing new in the name of science. Elon Musk took the stage to attract investors and new employees to his company.

What are the real developments in BCI technologies?

The subject of BCI (Brain Computer Interface) is mainly about high technology and even more about “ethics”.

Because, this technology is targeted directly to your toughts, and it is now mentioned that you can directly interfere with your brain without any layers in between.

Therefore, the problems that will arise should be related to human science such as Philosophy, Sociology and Psychology rather than being technical.

If you want, let’s look at the BCI topic first from a technical and then ethical perspective.

Although it is conveyed by avid futurists and technological storytellers as if there was no such technology until Elon Musk. The fact is, the idea of BCI is actually quite old.

Technically, the first BCI research began in the early 1970s on monkeys. The size and sensitivity of the sensors were pretty bad.

Below is a scene from the episode “Star Trek: The Brain of Spock -1968”, I think the device looks familiar to you, too 🙂

Nevertheless, scientists saw at UWSOM in 1970 that they could impart movement to Motor Cortex Neurons by manipulating the activity of neurons.

In the picture below, you see a monkey capable of using a robot arm, which is a much more sophisticated device, in 2008.

To put it technically simple, we can say that the robot arm is being moved with a computer model that can interpret the waves in the monkey’s brain.

As a result of 45 years of research that started with monkeys, the development of BCI technology can be summarized as follows:

Apart from these developments, like the Nobel Prize every year, there is an award given for advances in BCI technology: ANNUAL BCI AWARD.

I also leave the Wikipedia link for those who are curious. Especially newly established Startups share their developments on Wikipedia.

Wikipedia also has unconfirmed information, but I recommend you check it from time to time to get an impression.

Google: “In 2020, everyone will google search through the implant in their brain”

The first time I heard of the brain implant in the IT industry is 2010. Google CFO Hal Varian spoke about this in an interview and,

“Google implant will put the Web in your head by 2020”

When he was asked whether Google has done a work on creating an implant, he  mentioned google glass and said he doesn’t know the chip yet.

By the way, Google Glass is actually a BCI.

However, devices called BCIs today are much more compact than this and can be mounted on the body more firmly.

The hardware, known as Google Glass, was a structure that enabled camera, screen and human interaction through a pair of glasses. The industrial version is still on sale.

Google Glass was a BCI prototype, than why didn’t it work?

Google followed a very good strategy on BCI, and instead of developing a product for the end user, they developed a prototype. This prototype was Google Glass.

The Google Glass prototype help Google to revealed the ethical problems that BCI solutions can create in the daily life.

First, the restaurants posted “No Google Glass”. Because people who came to their restaurants were disturbed by this. Later, people stopped talking to you when you had Google Glass on your face.

The importance of privacy and personal freedom in everyday life is far more important to than you would imagine.

Wouldn’t you be uncomfortable, if you see someone who is constantly peeking around with a mobile phone camera?

Or, when you are talking with someone, and he/she is constantly searching your history on Linkedin and approves your talking via searches on Google?

Google tested it well before investing billions of dollars in “Chip Installing” and decided that the technology was not applicable to the Consumer Market.

Although Sergey Brin, one of the founders of Google, believed and supported the project so strongly, the project could only become an Industrial product.

There are dozens of startups on BCI, the article here mentions 4 pioneers. These pioneer companies are Kernel, Neuralink, Neurable, Paradromics.

What should not be forgotten about BCI is that the use of Medium can be very different, as in the example of Google Glass. For myself, I find things more realistic when there is a 3D printing tech involved. When the principle having all stakeholders a part of the solution. Like, the human tissue is constructed within the solution.

As we mentioned earlier, BCI and ethics are very much related concepts.

In an article published in Nature magazine, it is mentioned how BCI is important for privacy, identity and equality.

The following example is given:

A paralysed man participates in a clinical trial of a brain–computer interface (BCI). A computer connected to a chip in his brain is trained to interpret the neural activity resulting from his mental rehearsals of an action. The computer generates commands that move a robotic arm.

One day, the man feels frustrated with the experimental team. Later, his robotic hand crushes a cup after taking it from one of the research assistants, and hurts the assistant. Apologizing for what he says must have been a malfunction of the device, he wonders whether his frustration with the team played a part.

From an ethical point of view, I do not even want to think about where this personal data will be stored and for what purpose. Because we now know that even with our mobile phones, there are thousands of data collected every day without permission.

With the data they collect from us without permission, they know our habits, what we like and which party we can vote for, and they use this data to manipulate us.

It is chilling to even think about how the depths of our knowledge can be used as weapons by third parties.

Technological advancement tends to move towards implanting something in the brain rather than a one-way reading (from brain to device). They want to exactly use the method we mentioned in the example of Google Glass.

We should not forget that there is no interface like an eye in between. BCI will directly insert data into neurons in the brain.

How can you be sure that the data inserted is the data you have been told?

An epilepsy patient who uses a device with a BCI interface says that his personality changed a lot after he started using the device.

He states that prevention of his epileptic seizures has given him a different personality. He is no longer the same person, and a part of him is missing.

In the same article, it is mentioned that the interventions made to the brain with DBS (deep-brain stimulation) make patients angry and aggressive, and the implementation of these changes creates serious ethical problems.

It has also been revealed in clinical studies that the same people develop Hypersexuality and different impulsive habits.

To summarize, the issue we are talking about here is about our brain. It may make up 2% of our body, but even when I am  typing these words, my brain is actually pressing the keys of the keyboard.

We should be more careful about direct interventions with it and focus more on protecting it.

Because it seems that we will only be able to learn what harm  we are doing to our brain after it is too late.

PS: Finally, I have a great technical article suggestion for those who want to deal with this topic. He explained the creation of a computer model with EEG very well here.